My Journey From Surviving To Thriving

For a long time in my early adulthood, I was in a constant state of stress and tension. It may not have been visible to those around me – but looking back, I can see it was always there.

I didn’t have anything particularly dreadful happen to me. Certainly, from the outside, I was successful. A good job in a great company, living in a vibrant city and surrounded by friends. Later, I picked up a fabulous partner and helped to raise his two amazing teenage girls.

But on the inside, I was tired, aching, stressed, worried I wasn’t good enough. On some level, I knew I was on a path to becoming unwell, but I had no idea what to do about it.

Essentially, even though everything seemed hunky-dory, I was merely surviving.

But today, my life is completely different.

I wake up earlier (hours earlier!). Have more energy. Am much more able to cope with everyday stresses and strains.

I run a business (and support my husband in his) and have a fledgling YouTube channel. I look after my nephew and niece, and support my family.

More tangibly, I have less pain, and much less tension in my jaw.

In short, I am thriving.

How did I make this shift?

Of course, there were a few detours, hiccups and challenges along the way. But each of those was a valuable lesson on this journey.

If you’d like to read more about my journey, you can do that here.

*Funnily enough, two of the people who inspired me had left their desk jobs to become yoga teachers (hey Debbie and Katie – thanks!). Lo and behold, all these years later, it turns out I have inspired other people to do the exact same thing – I’m looking at you Abi, Anja, Kath and Eva! 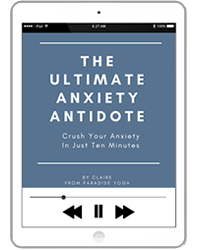 This quick and simple antidote will help you to instantly calm your nervous system, reduce symptoms of anxiety AND discover an inner source of vitality you never knew you had!